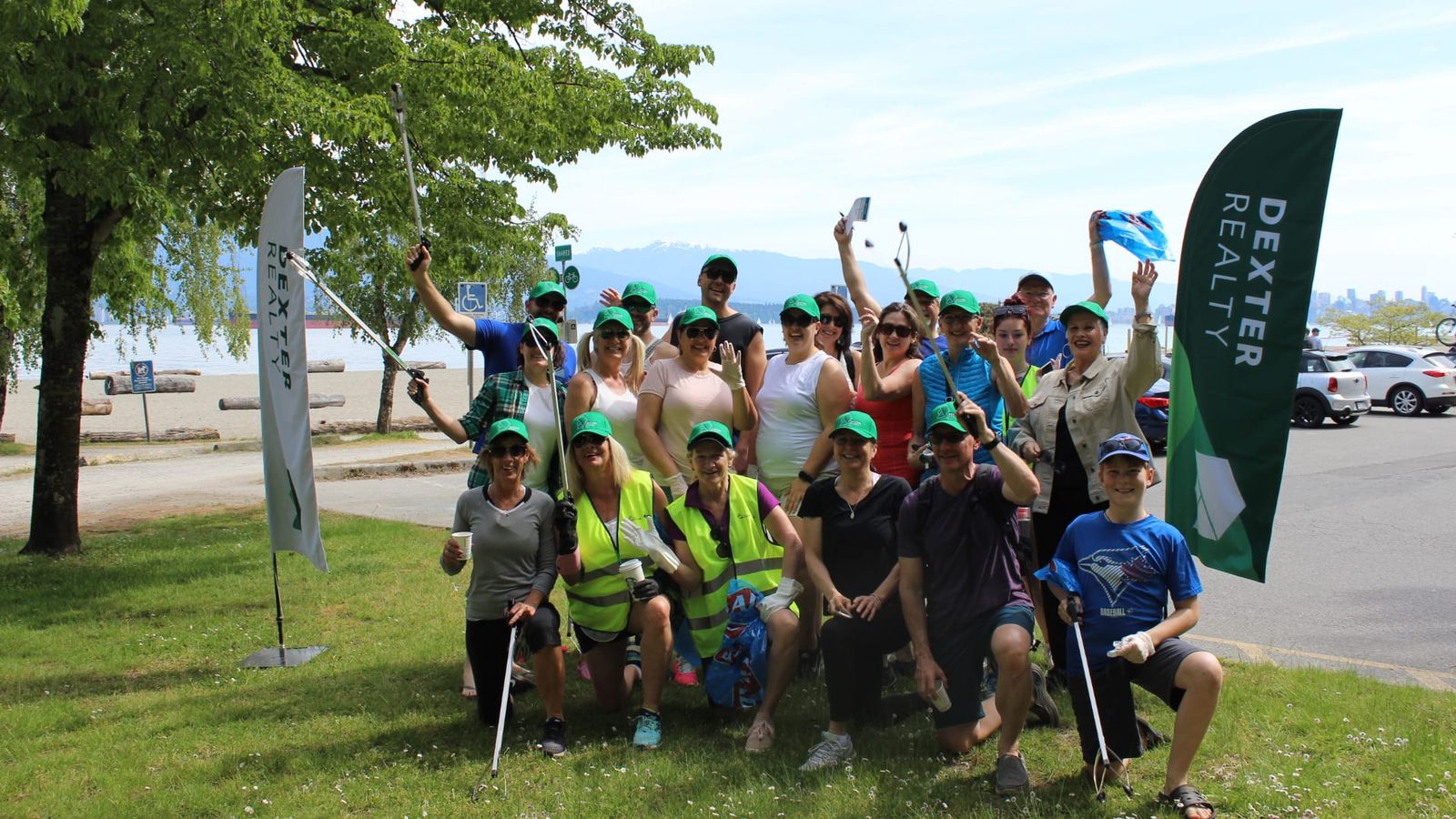 Sometimes making a difference means pitching in and picking up some trash.

As Greater Vancouver’s proudly independent brokerage, we consider it our pleasure to do our part for our beautiful city. And we’re happy to put a sunny Saturday where our mouth is!

On May 11th a group of thirty Dexter agents and friends—along with two good samaritans, who saw our posts and came to join the cause—took to the shores of Spanish Banks. We were armed goodwill, and an insatiable desire to clean up one of Vancouver’s most beautiful public beaches. Happily, the City of Vancouver had also supplied us with the tongs for garbage pick up, garbage bags and sheets to record what we’d collected. Stand-out items from the day include a dog crate and kitchen countertop (though, curiously, not the sink).

By the end of the day we’d collected  twenty-two bags of garbage!

We had a lot of people thanking us for our efforts, and we couldn’t be happier to have improved their space and their day at the beach. Along with thanking everyone who helped out, we would particularly like to thank Brooke Alexander for coming up with the idea for this event and Nick Moroso and Brooke for their organizational efforts.

We will be looking to do this again soon—just at a different location. So stay tuned for the next Dexter Shore Clean Up! 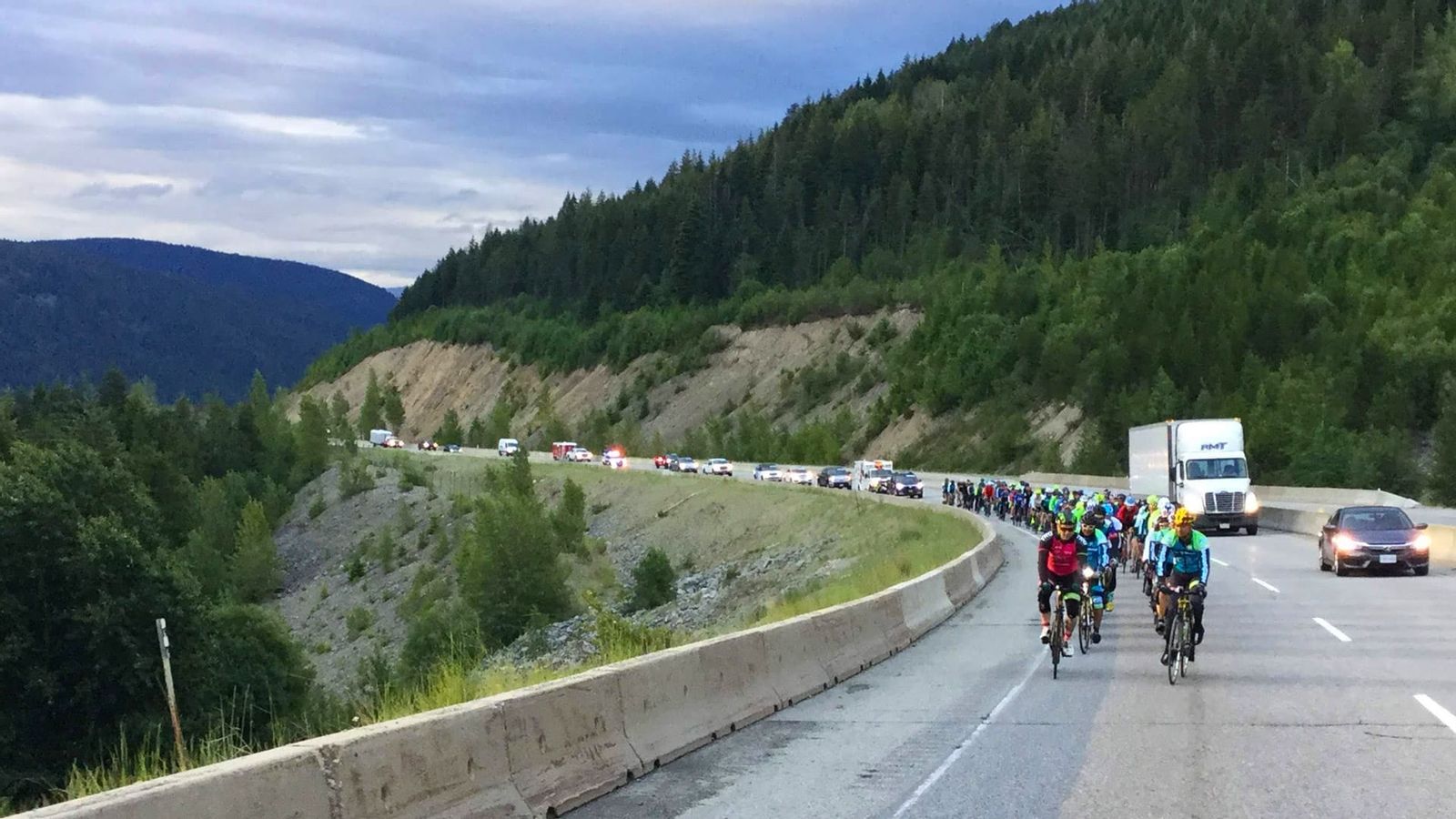 Why President David Peerless is putting his pedals to the metal to conquer cancer, and how you can help.

At Dexter Realty, we’ve got a long history of supporting our communities and our agents, working to do our part to improve everyone’s lives. And our Managing Brokers are always ready to lead the charge.

President David Peerless is especially committed to raising funds for cancer research and encouraging people to get on a bike (for the obvious health benefits).

The Ride 2 Survive fits both those goals perfectly.

This year David is participating for the third time. It’s simple. He wants to raise funds to invest in cancer research. Having lost too many loved ones to the disease, taking part in fundraising initiatives is how he knows we’re making a difference for those who are fighting to survive—and to remember those who have succumbed.

So what does it mean to Ride 2 Survive?

David and his fellow riders do this approximately 20 hour, one-day ride because it can make a difference. 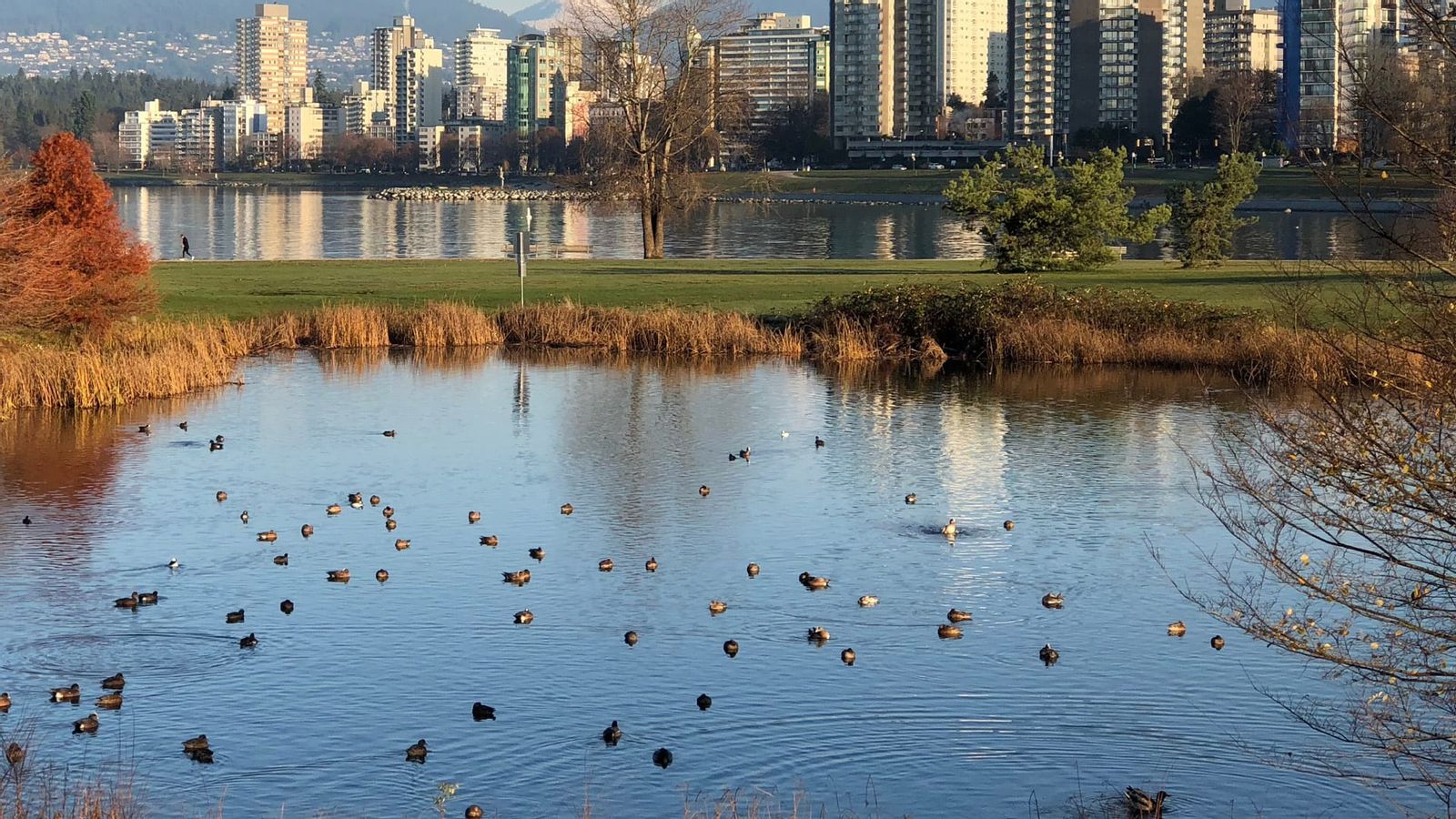 “It ain’t what you don’t know that gets you into trouble. It’s what you know for sure that just ain’t so.”

Not much is changing in the market in relation to sales numbers, we are seeing the total number of homes sold consistently below 2,000 since July of 2018. But on a positive note, it was the 4 straight increase month over month. Rome wasn’t built in a day nor is the Greater Vancouver housing market. The pent-up demand continues to build as a result. There were 1,850 sales in Greater Vancouver in March 2019, the lowest total for the month of April since 1995. The standoff continues between buyers and sellers as both sides are waiting for the other to blink. Increasingly sellers are starting to blink first as buyers are being very selective on what they are willing to offer on and jumping on properties that are priced well in today’s market. An opportunity that has been long sought after from buyers in Metro Vancouver.

The 1,850 homes sold in Greater Vancouver in April were up from 1,745 (6%) from March this year. This was compared with 2,631 sales (down 30%) in April last year and 3,617 sales in March 2017. This was 45 percent below the 10-year average for April. Around the region, North Vancouver and Richmond saw total home sales decline in April compared to March – while all other regions saw sales increase in April. Port Moody had the largest increase in sales in April compared to March.

On the other side of the equation, there were 5,900 new listings in April in Greater Vancouver, down from 5,943 in April last year and up from 5,057 in March 2019. The number of new listings in April were 2 percent below the 10-year average for April. There are currently 15,050 Active Listings on the market in Greater Vancouver – up from 10,474 at the end of April last year. This is the highest number of Active listings since September 2014. While Active Listings are up 44 percent to last year, this trended down 4% compared to March year over year. But clearly, the growth in listings is attributed to the lack of home sales occurring in the market. New Listings are not occurring at a higher rate compared to previous years. Buyers have a lot more choice than they have had in the past though allowing for an opportunity.

“Government policy continues to hinder home sale activity. The federal government’s mortgage stress test has reduced buyers’ purchasing power by about 20 percent, which is causing people at the entry-level side of the market to struggle to secure financing,” Ashley Smith, Real Estate Board of Greater Vancouver president said. “Suppressing housing activity through government policy not only reduces home sales, but it also harms the job market, economic growth and creates pent-up demand.”

The Fraser Valley Real Estate Board processed 1,383 sales of all property types on its MLS® in April, a 13.3 percent increase compared to sales in March 2019, and a 19 percent decrease compared to the 1,708 sales in April of last year. Of the 1,383 total sales, 489 were residential detached homes, 379 were townhouses and 374 apartments. “Consumers may not have the purchasing power that they did prior to January 2018, but the desire for homeownership is still there and we’re seeing that reflected in our MLS® data,” Darin Germyn, President of the Fraser Valley Real Estate Board, said “A slower, stable market has had a positive impact on affordability in our region. Prices of typical residential homes in the Fraser Valley have decreased between 5 and 6 percent in the last year. In the last three months, benchmark prices have either plateaued or have experienced a small recovery.”

Summing up the Numbers 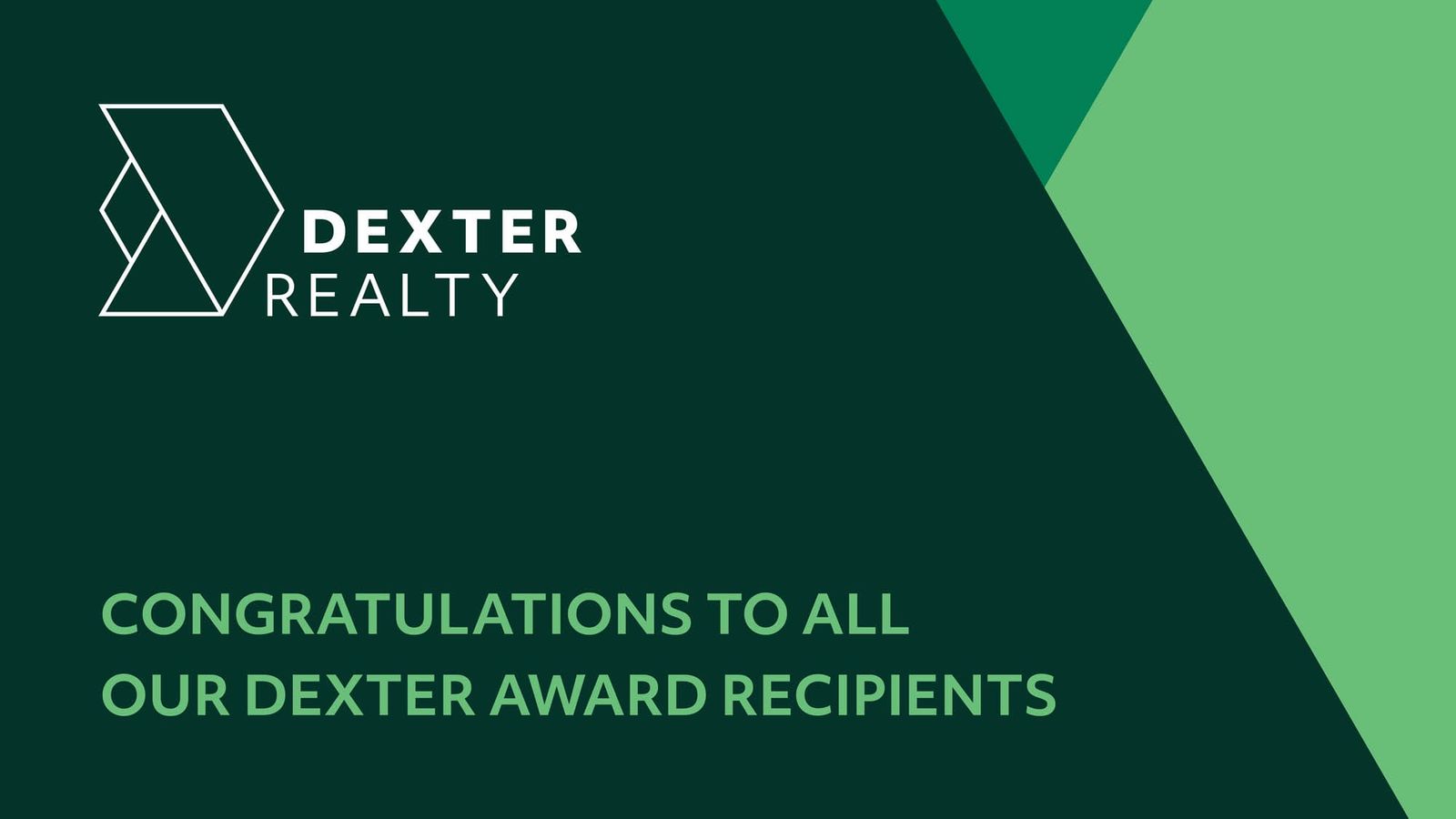 At Dexter, we’re proud to say we have the most dedicated, empathetic and motivated agents in the Lower Mainland.

Once a year we celebrate those who deserve recognition for their outstanding efforts—those agents who, in the preceding calendar year, exemplified the highest standards of work ethic, skill, and focused effort, in both our company and the broader real estate profession. Award recipients are also individuals who lead by example, often mentoring others in our company. That care, that willingness to go above and beyond, is a true sign of the leaders winners tend to be.

President David Peerless has always viewed the giving of awards to our agents as the simple acknowledgment of their extraordinary effort, commitment, and passion for their client’s needs.

Our annual awards give us the opportunity to acknowledge our winners in signature Dexter style. In recognition of our winners’ generosity and success, we made a contribution in their name to their charity of choice. And to support the continued growth of their real estate careers, we also contributed dedicated marketing support to help further their personal business p