Sales and Listing Report for January 2022 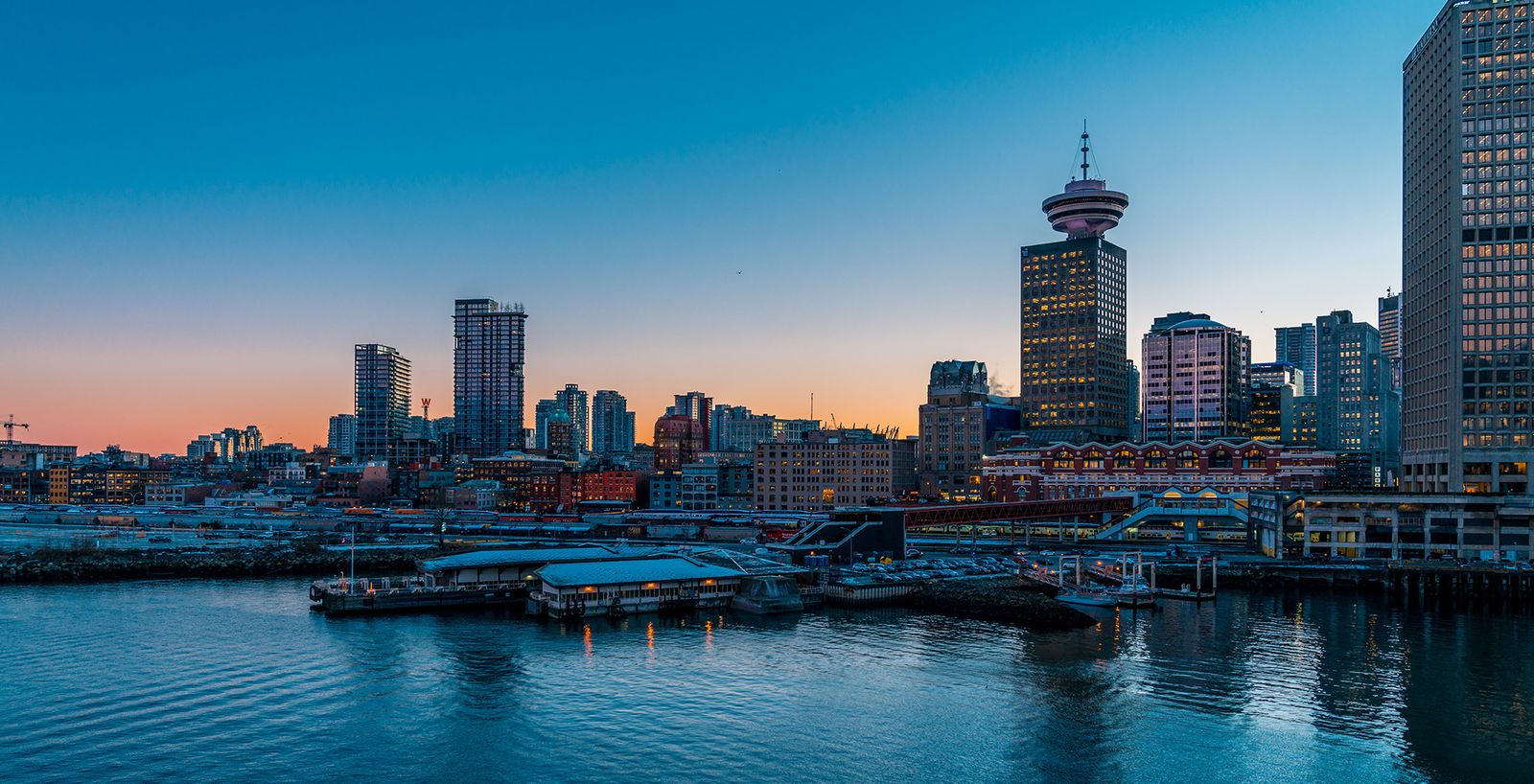 So you need to buy a home. Now is a good time to do so.

There have always been challenges purchasing in one of the most expensive housing markets on the planet. It is still possible, though, to find the home or investment of your dreams in Metro Vancouver, and despite the headwinds, this is actually a good time to be purchasing, with the help of an experienced and connected real estate company.

The main challenge is finding a home to purchase.

The big question in today’s Metro Vancouver housing market is not ‘where will the new supply’ come from?’ but ‘why is there such a shortage of homes for sale?’ especially in an environment where buyer demand and price increases are at such a feverish pitch.

This past month we have seen houses and townhouses sell within days for well over the asking price. It is not uncommon for a single listing to attract a dozen or more offers.

The demand is coming from conventional buyers wanting to buy their first home or trying to move up to investors and families hoping to buy a second or perhaps a third property as a smart hedge against the highest inflation rate in more than 30 years. But let’s not forget, the investment properties become rentals for a starved rental market and allow developers to build more supply.

Caught in the headlights of this traffic is homeowners who are fearful that if they sell, they won’t be able to purchase a similar or better home because of the shortage of listings and the amazing price parity being seen across the region.

In January, for example, the benchmark price of a detached house was the almost exactly same on Bowen Island – $1.48 million – as in North Delta at $1.45 million. A typical townhouse sells zin Squamish, at $936,000, the same as the average price in the Fraser Valley. At just under $600,000, a Sunshine Coast condo apartment is priced at the same level as in New Westminster or Ladner or Cloverdale. This is the time when a great buyer’s agent is very much worth working with.

Unnecessary costs and delays continue to hurt supply and contribute to the added price of housing. In January, a local developer lamented that they have waited five years for building approval from the City of Vancouver on a project that includes 20% below-market homes around the SkyTrain. And while the city delayed building permits, they were also being charged $250,000 in annual Empty Home Taxes. This can make affordable rental projects financially unviable.

Highlights of this Report:

A summary of the January numbers: 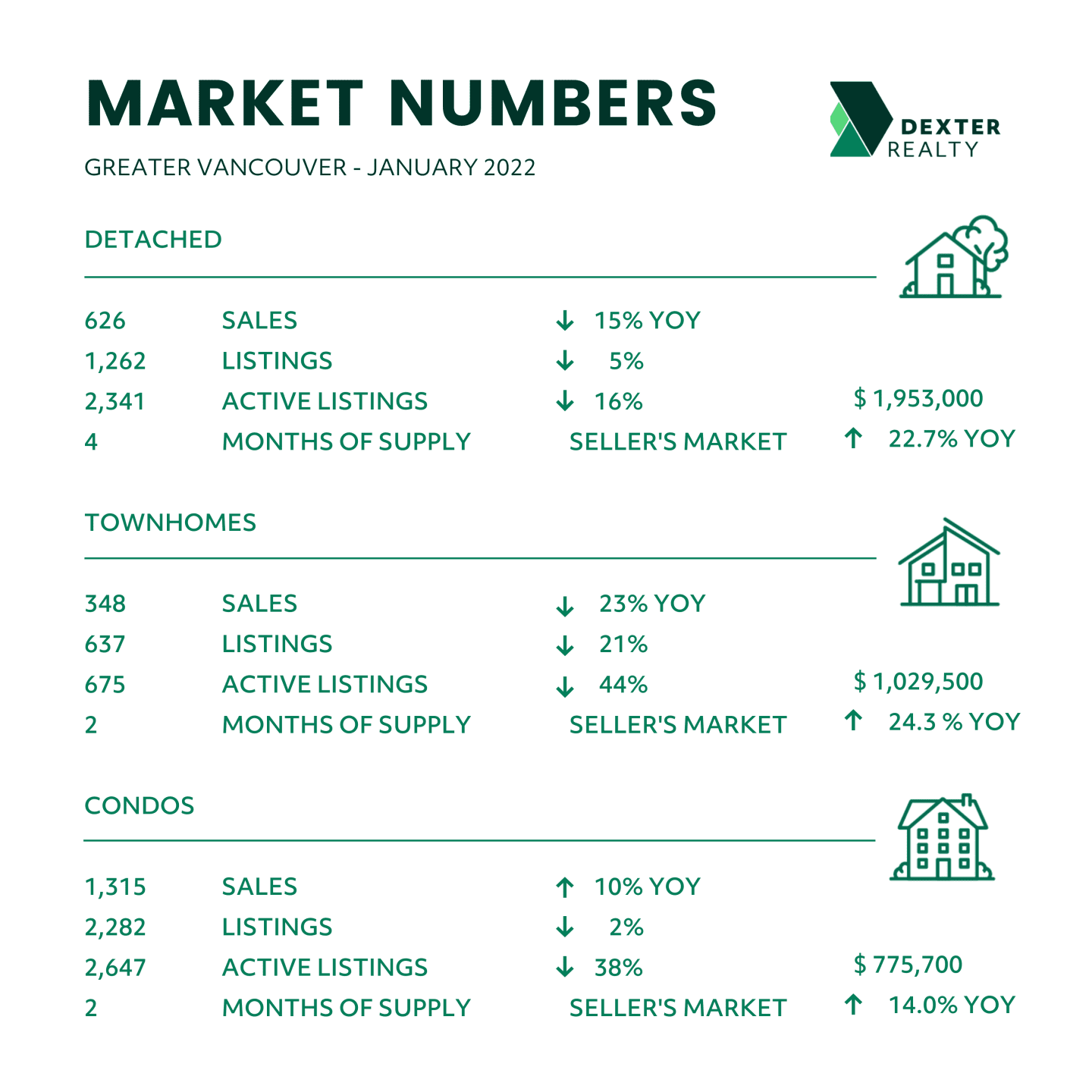 But the slow sales are linked to a lack of inventory: active listings for the month reached just 5,987 properties, compared to 8,831 at that time last year and 5,588 at the end of December 2021. New listings in January were down 8% compared to January 2021, though up 6% compared to January 2020. The result was a sales-to-listing ratio of 55%, the highest for a January in two years, and sharply higher prices. The composite residential benchmark price in January – which combines all property types was $1,272,000, up 2% from a month earlier and 18.5% higher than in January 2021. This is a staggering annual cash increase of $234,900. The typical detached house sold in January for a record benchmark high of $1,953,000, up 22.7% – or $438,000 – from a year earlier. This level of performance is the best evidence of why there is such an insatiable demand for Greater Vancouver housing. Total housing starts across all of Metro Vancouver in 2021 were 26,013 homes, up just 3,000 starts from 2020. It is the townhouse sector that is seeing the highest demand and price growth, with a year-over-year increase of 24.3% in January to $1,029,000. Yet only 236 new townhouses began construction in January and 186 of these were in Surrey and Langley.

As January ended, the inventory of total residential listings was at a 3-month supply, signaling the seller’s market will continue. 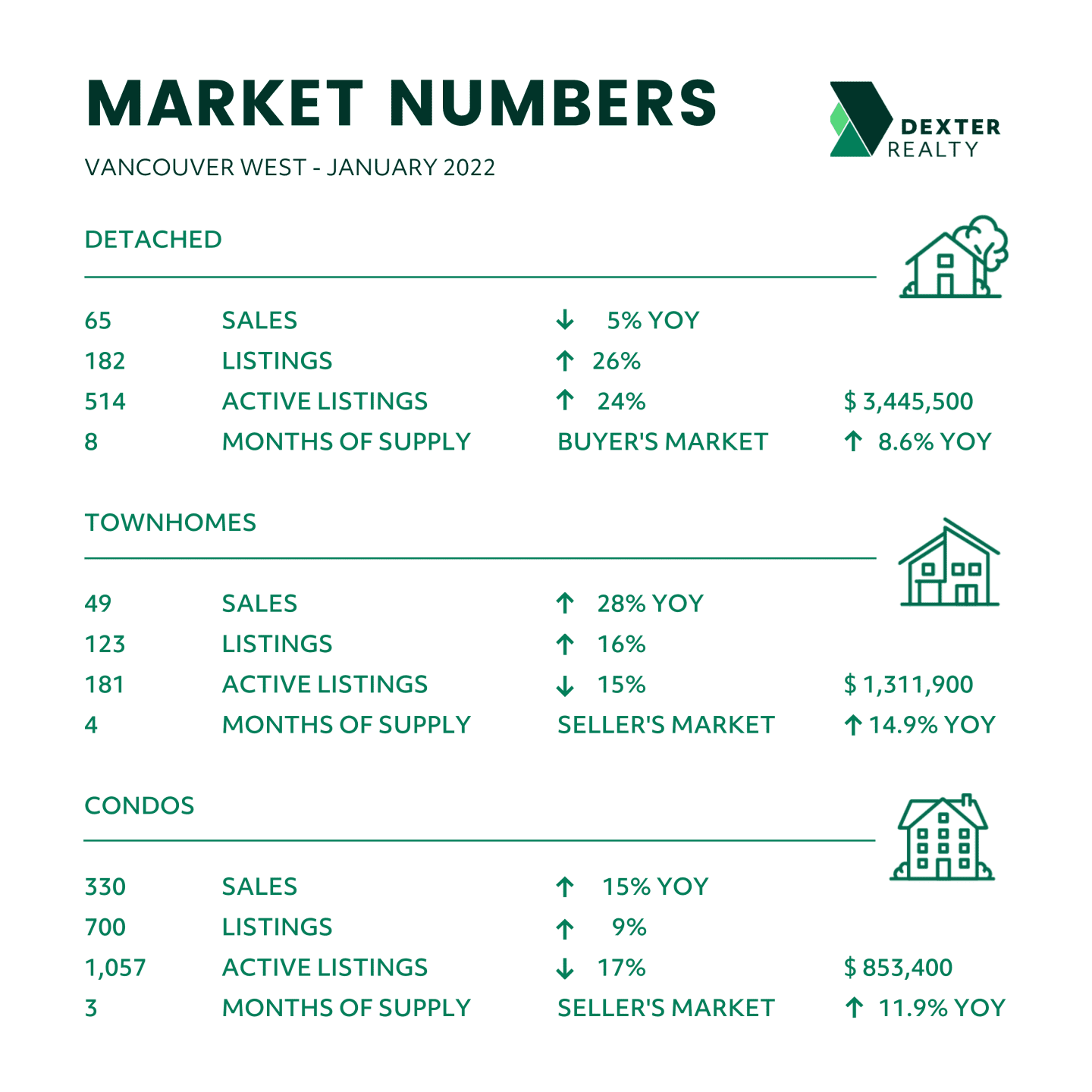 There was a modest January listing rally for Westside townhouses, a property species that has been hunted to near extinction. New listings rose to 123, compared to just 47 in December 2021, and the benchmark price increased 15% from a year earlier to $1,311,000, based on 49 sales. But only 68 townhouses started construction on the Westside during all of 2021 and no townhouses started on the Westside in January 2021. If you own a Westside townhouse and have considered listing, it would likely attract multiple offers this month. The benchmark price for a detached house on the Westside is now $3,445,400, yet an average of more than two houses sold every day during January, trailing only Richmond for the highest house sales in Greater Vancouver. Condo apartment sales dominated the buyer action on the Westside in January, however, with 330 transactions at a median price of $856,000 and a sales-to-listing-ratio of 47%. 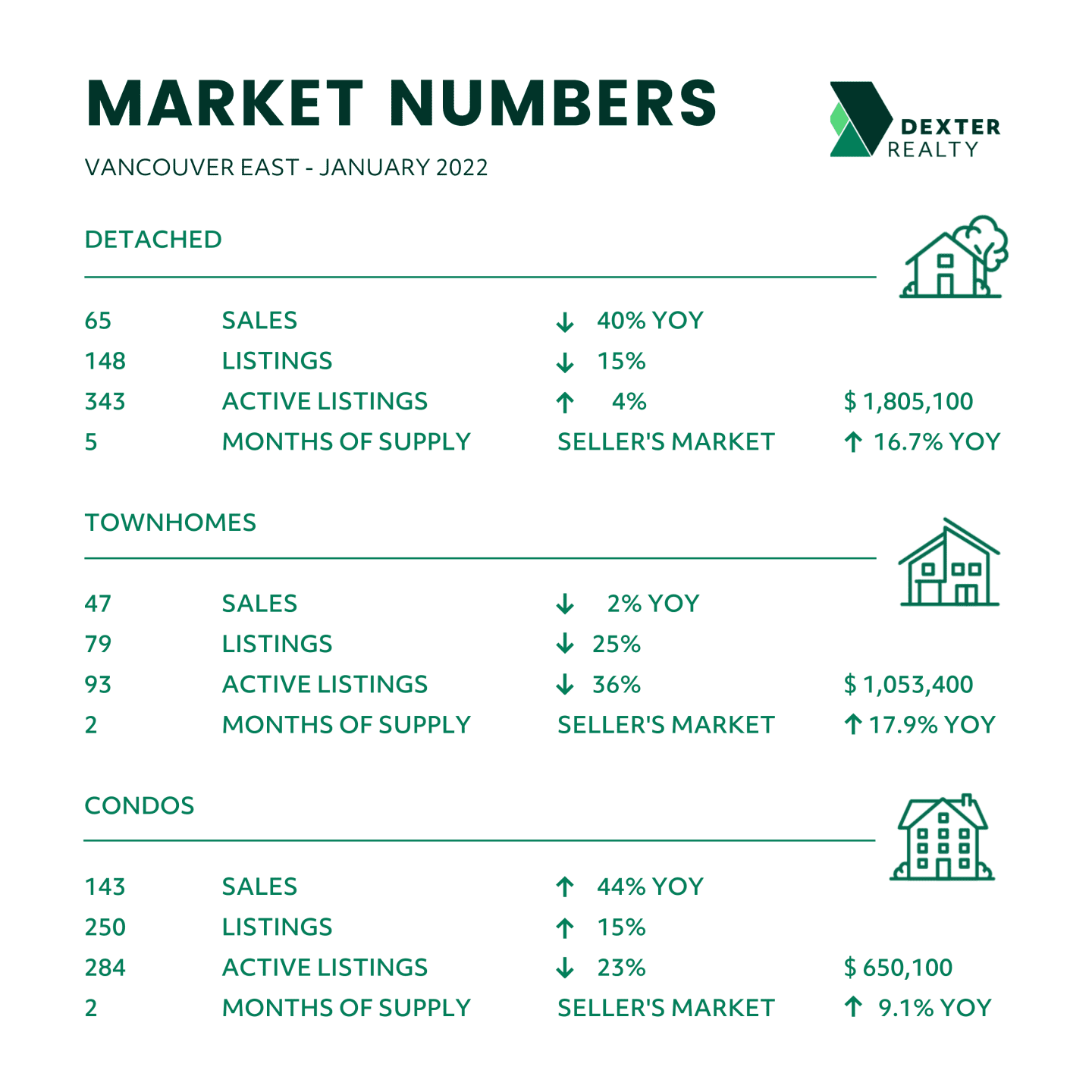 A total of 257 residential properties sold in January, unchanged from the same month a year earlier and up 13% from December 2021.

Total new listings in January were down 5% compared to January 2021. The overall sales-to-listings ratio of 54% compared to 51% in January 2021. The sales-to-listings ratio for townhouses is 59%, yet the benchmark townhouse price dipped 3% from December 2021 to $1,053,400 in January, the only Metro sub-market to post a month-over-month price decline in townhouse prices. Of course, the 21.5% increase in the previous 12 months may have had something to do with this. Expect more price gains to come. 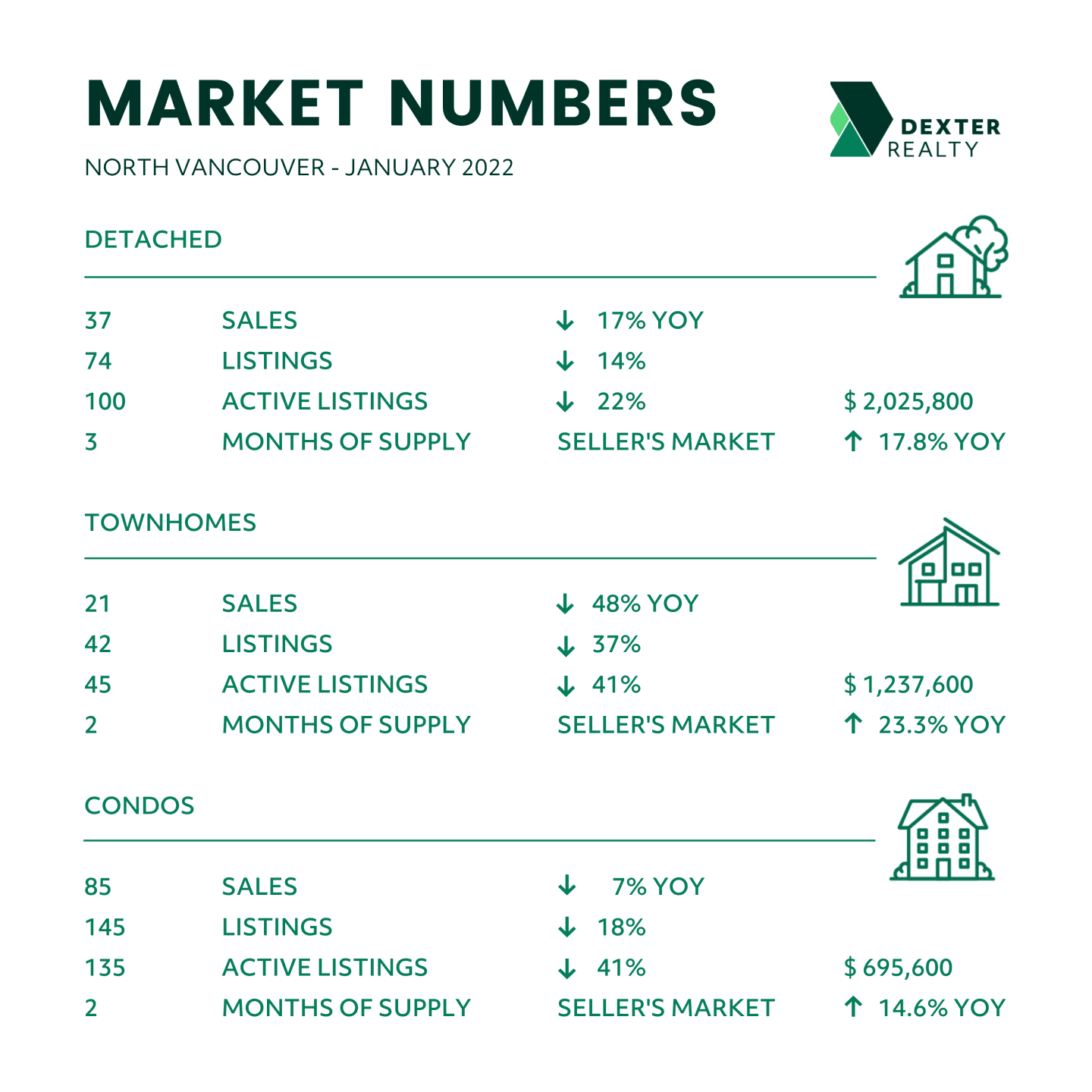 North Vancouver joined the $2 million house price club in January as the benchmark detached house increased 2.9% from a month earlier to $2,025,800. This may have spooked some buyers, as detached sales dropped to 37 transactions, down from 56 in December 2021, despite new listings rising to 74 houses, up from 25 a month before. The detached house and townhouse sales-to-new-listing ratio are both at 50%. In January, 59% of the 109 listings for condo apartments sold at a benchmark price of $695,000. Total new listings in January were down 24% compared to January 2021 in this seller’s market. 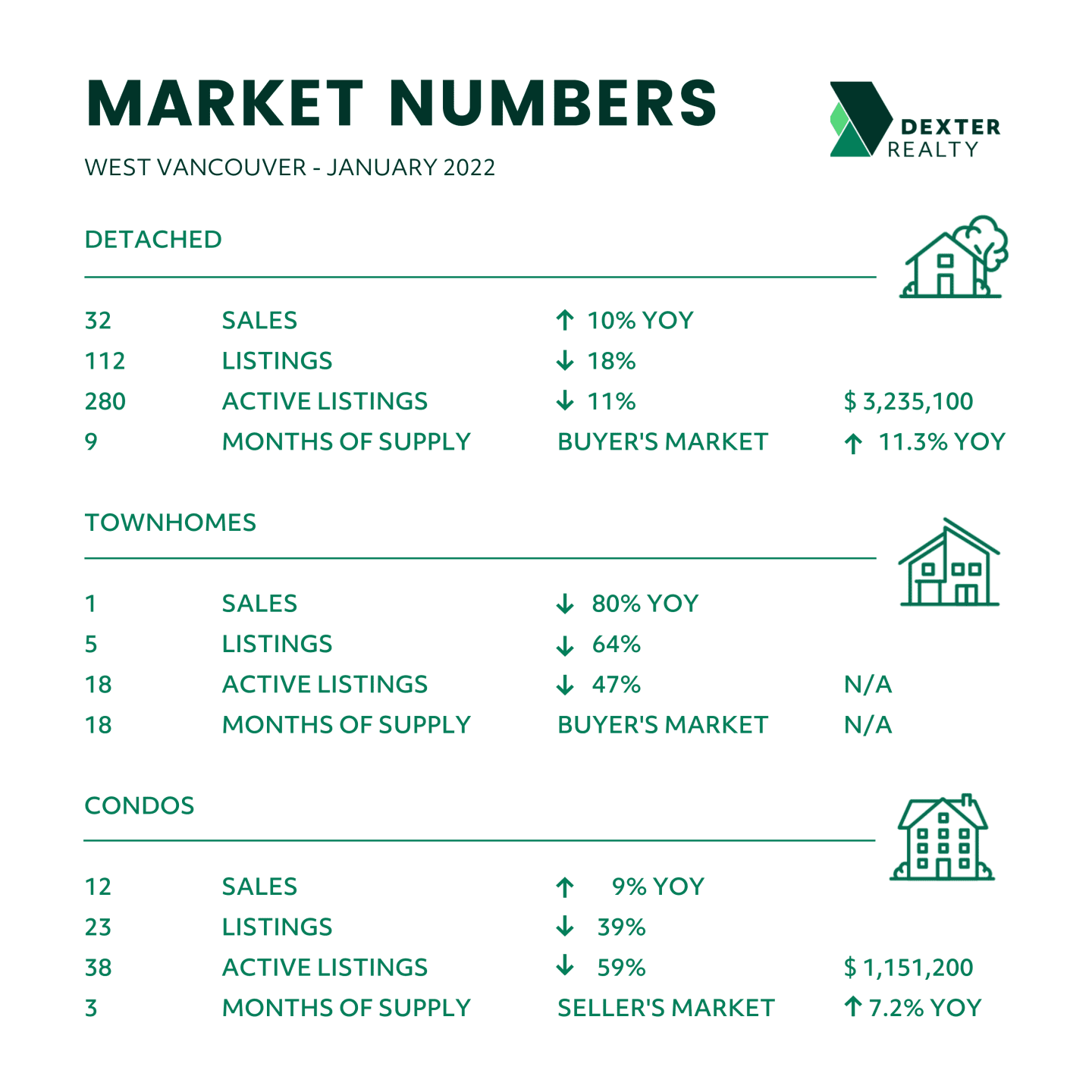 This remains an exclusive market, where the benchmark home price is among the highest in Canada at $2,605,000 in January, due to the dominance of detached houses, which now sell for a median of $3,080,000. West Vancouver home prices have remained fairly stable over the past year, inching up just under 1% per month. West Vancouver condos remain the most expensive in the Metro region, at a January benchmark of $1,151,200, based on a dozen sales. Total new listings in January were down 27% compared to January 2021. There is, however, a relatively healthy 8-month’s supply of total residential listings in what is one of the rare balanced markets in the region. 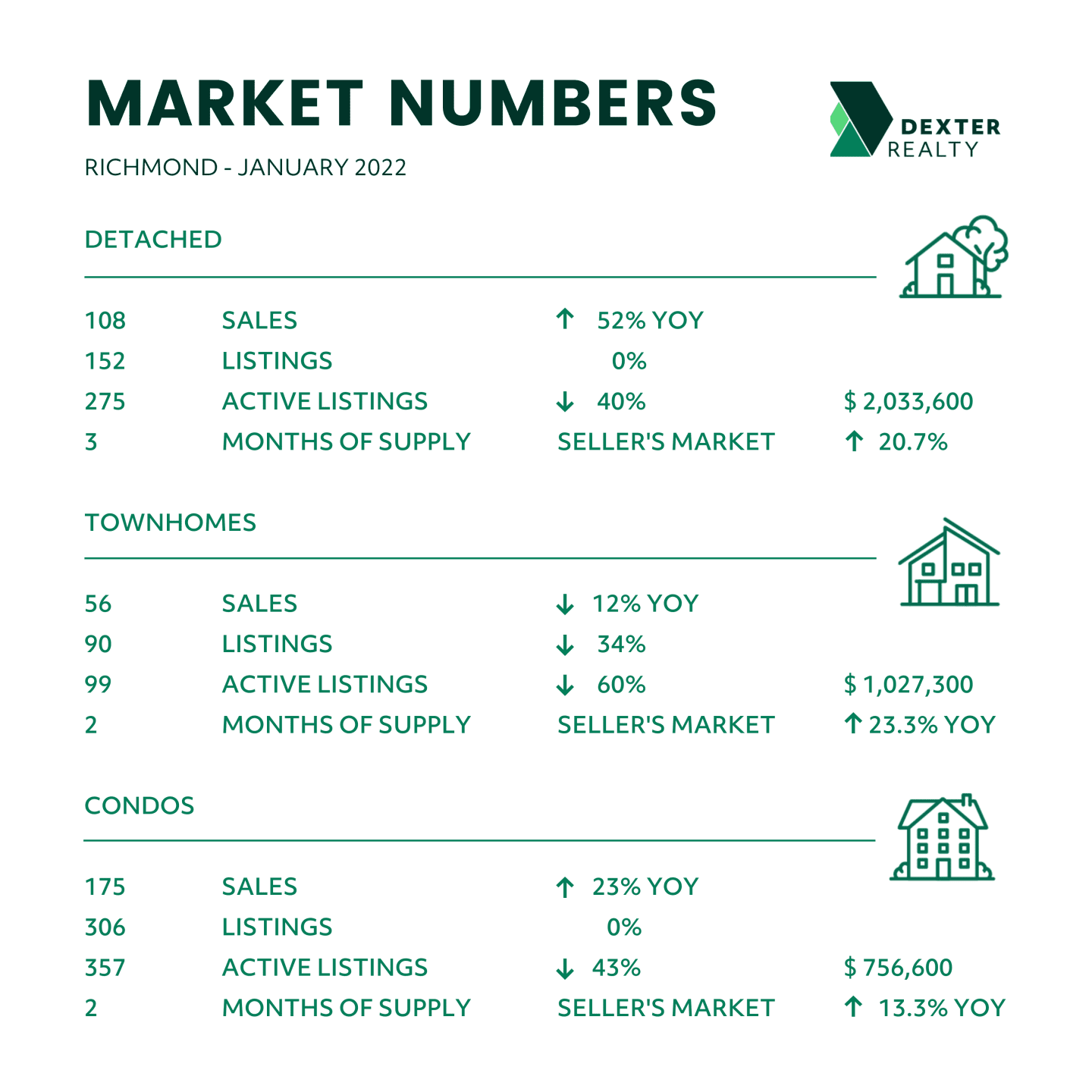 Richmond kept the real estate market active as sales were up 23% this January compared to January 2021, while they dropped in most other communities. Richmond detached house prices reached a benchmark of $2,032,000, remaining above the $2 million level for the second straight month. There were 108 detached sales in January, higher compared to both December 2021 and January of last year. Richmond posted the highest townhouse sales in Greater Vancouver in January, with 56 selling at a new record high of $1,027,300, up nearly 4% from December and 24% higher than a year earlier. Total new listings in January were down 7% compared to January 2021. The overall sales to listings ratio is 61% compared to 47% in January 2021 in this strong seller’s market. 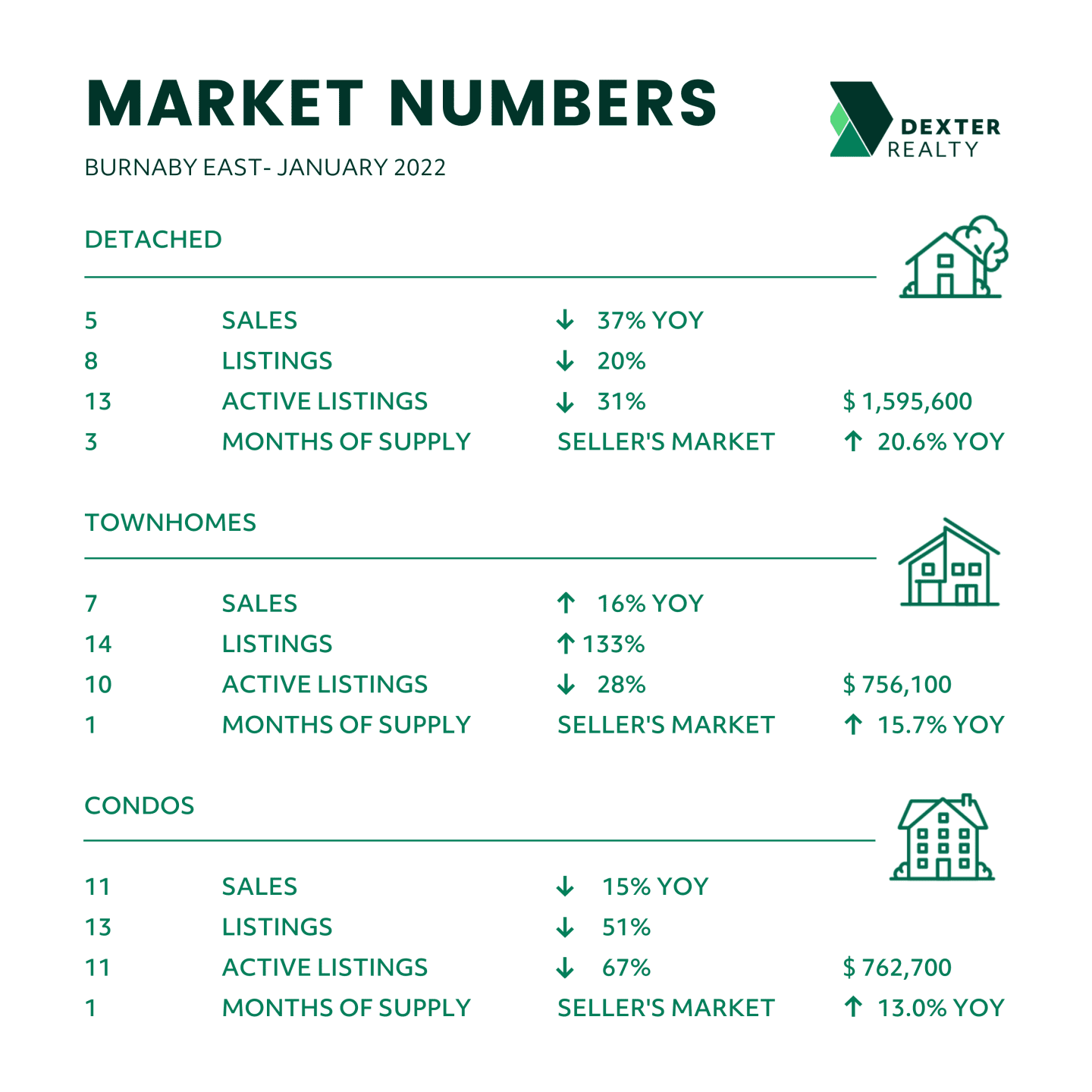 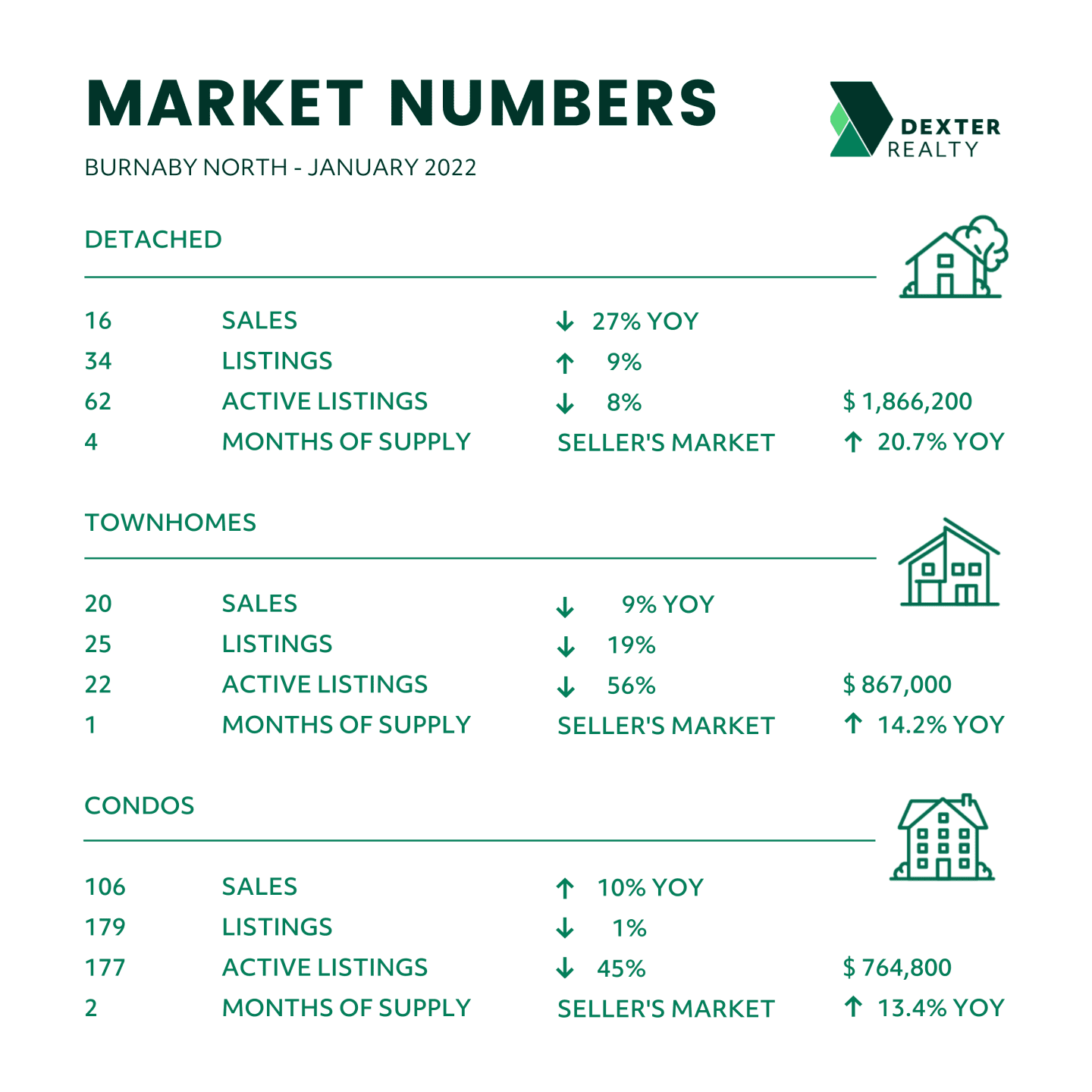 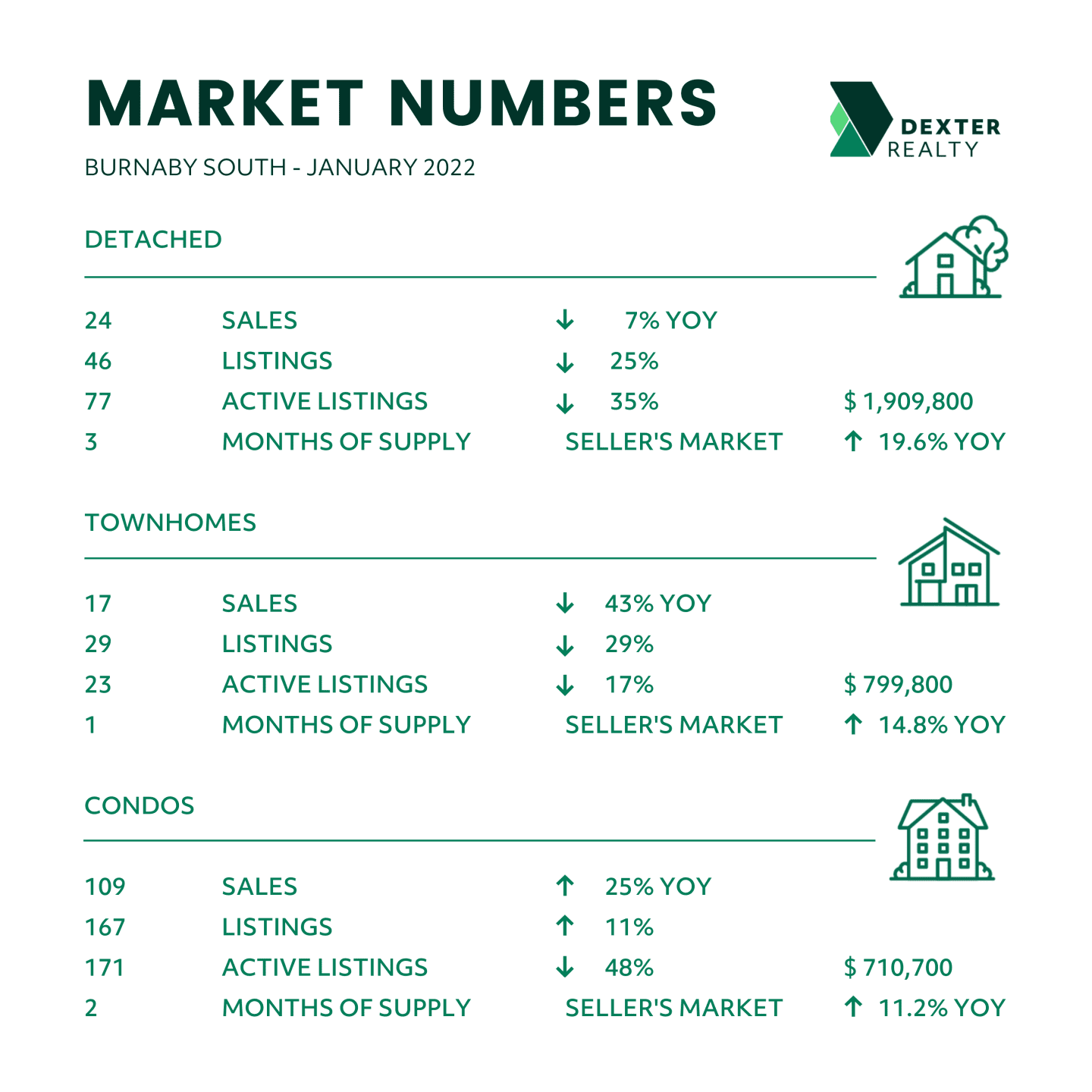 After a slow 2020, a successful pre-sale condo launch late in 2021 spurred Metrotown land development action in January. The land prices give an indication of where new Burnaby South condo prices are heading. In January, a 1.4-acre site that falls under the new Metrotown Official Community Plan, which allows greater density, sold for more than $45 million: yes, that works out to about $32 million per acre for a site that could potentially developed into about 396,000 square feet of tower apartments. In January, condos in South Burnaby sold for a benchmark of $710,700, a price up 2% from a month earlier. Total new listings in January were down 7% compared to January 2021. The sales-to listings ratio was 62% compared to 55% in January 2021. 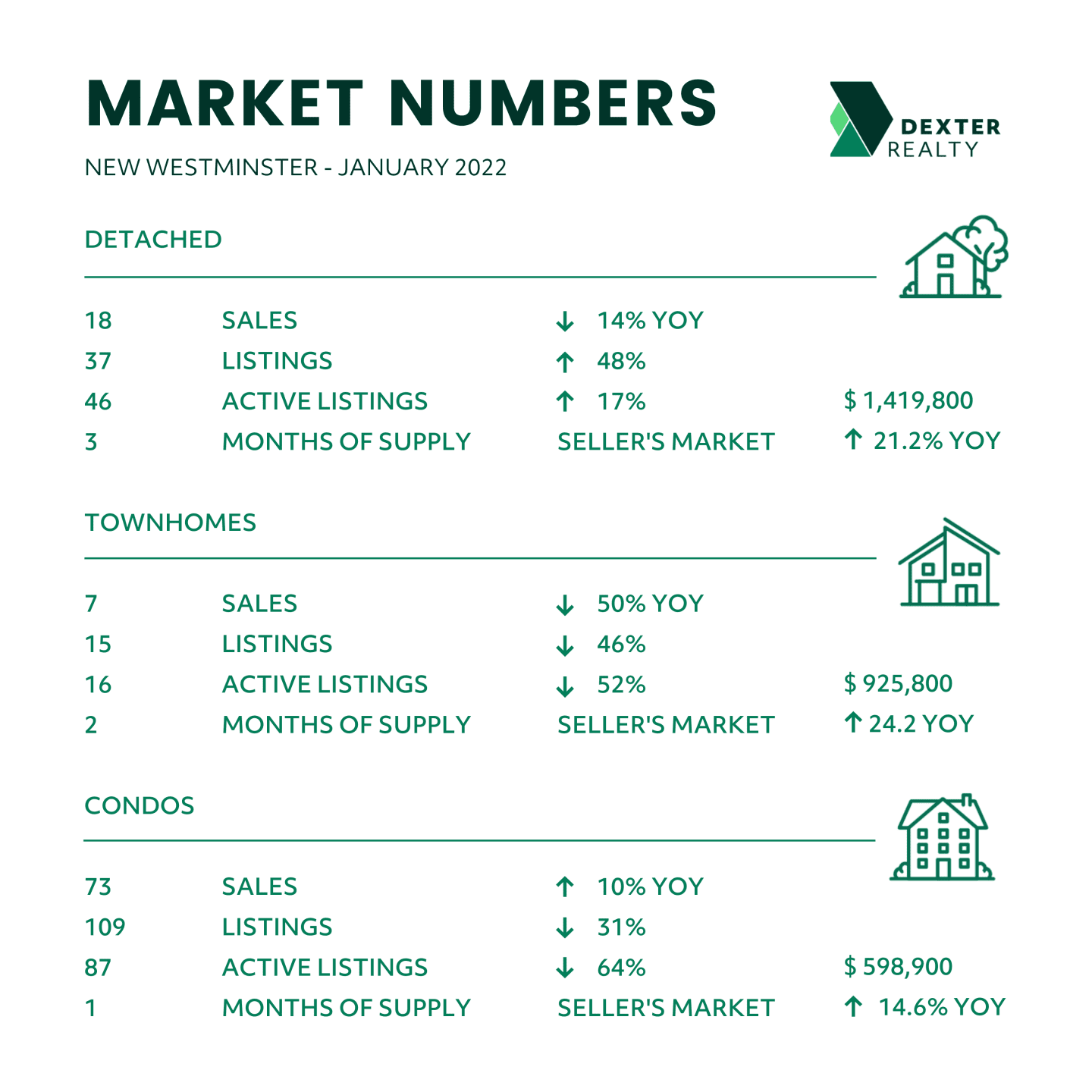 The Royal City is the only community in Greater Vancouver where the composite benchmark price is under $1 million, because condo sales dominate transactions. The composite price was $773,600 in January, which was $500,000 below the Greater Vancouver benchmark of $1,255,200. The median price of a condo apartment, which accounted for nearly 80% of January sales, is $598,600; townhouses sell for $925,800; and the typical detached house sold in January for $1,419,000. Total new listings in January were down 22% compared to January 2021. The overall sales to listings ratio is 61% compared to 47% in January 2021. 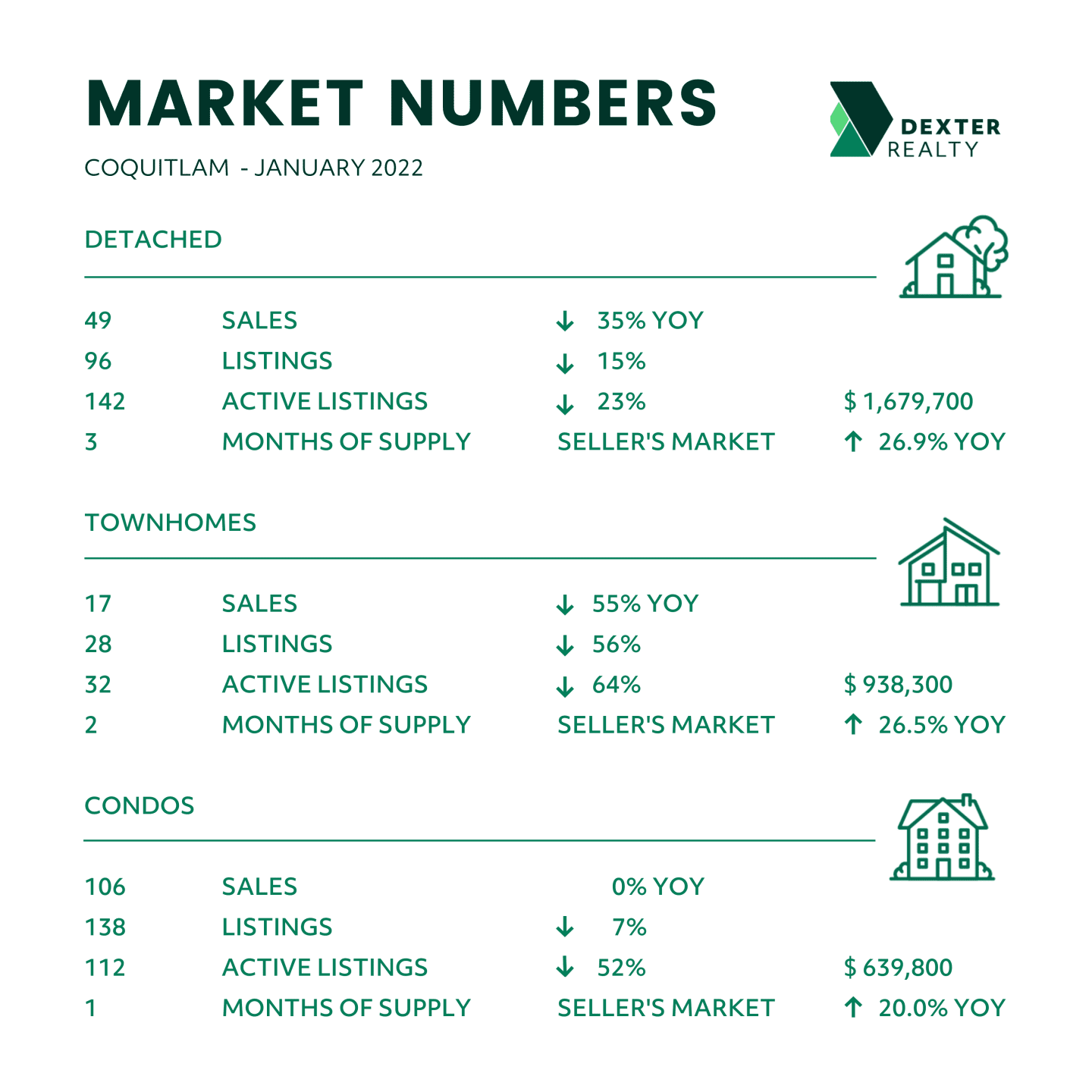 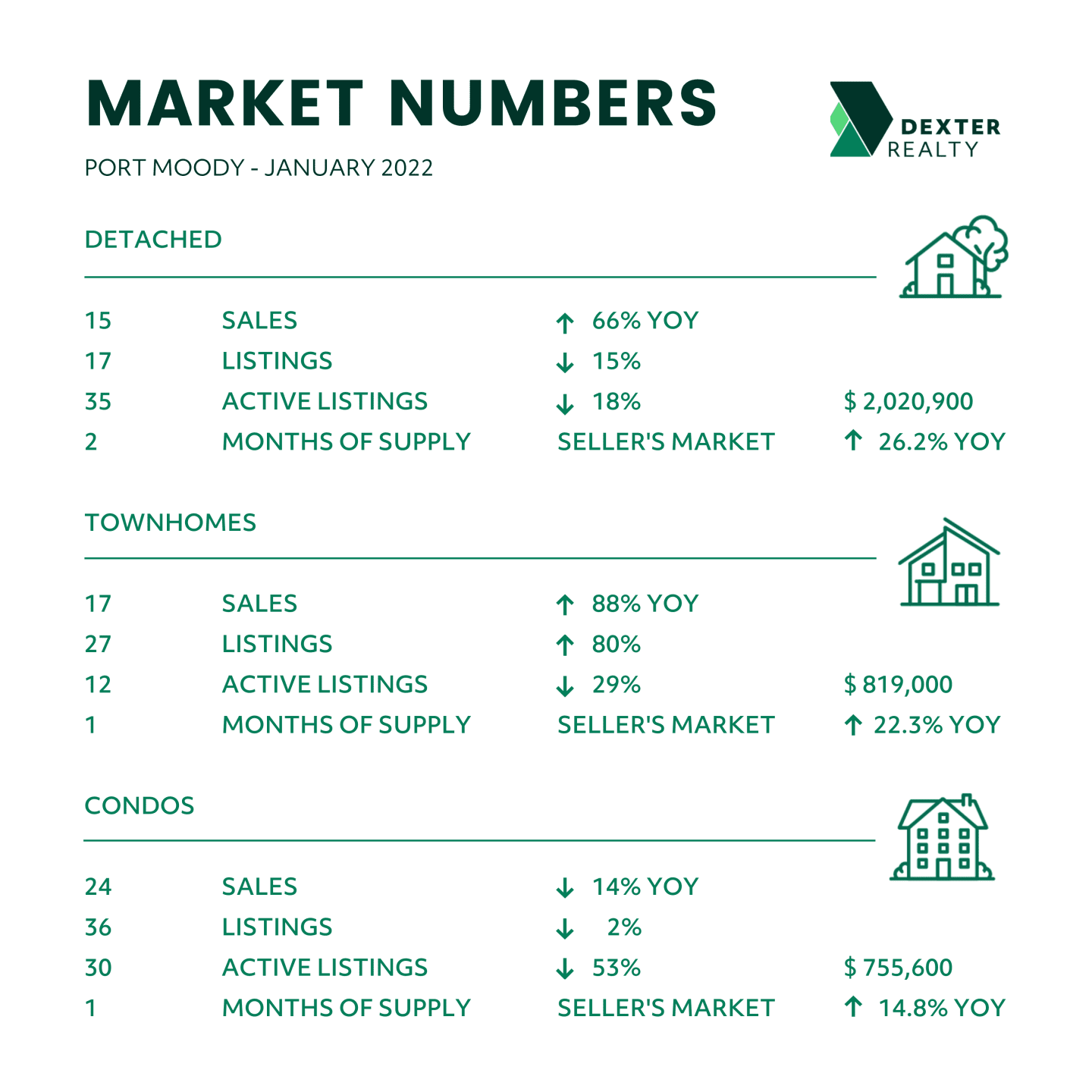 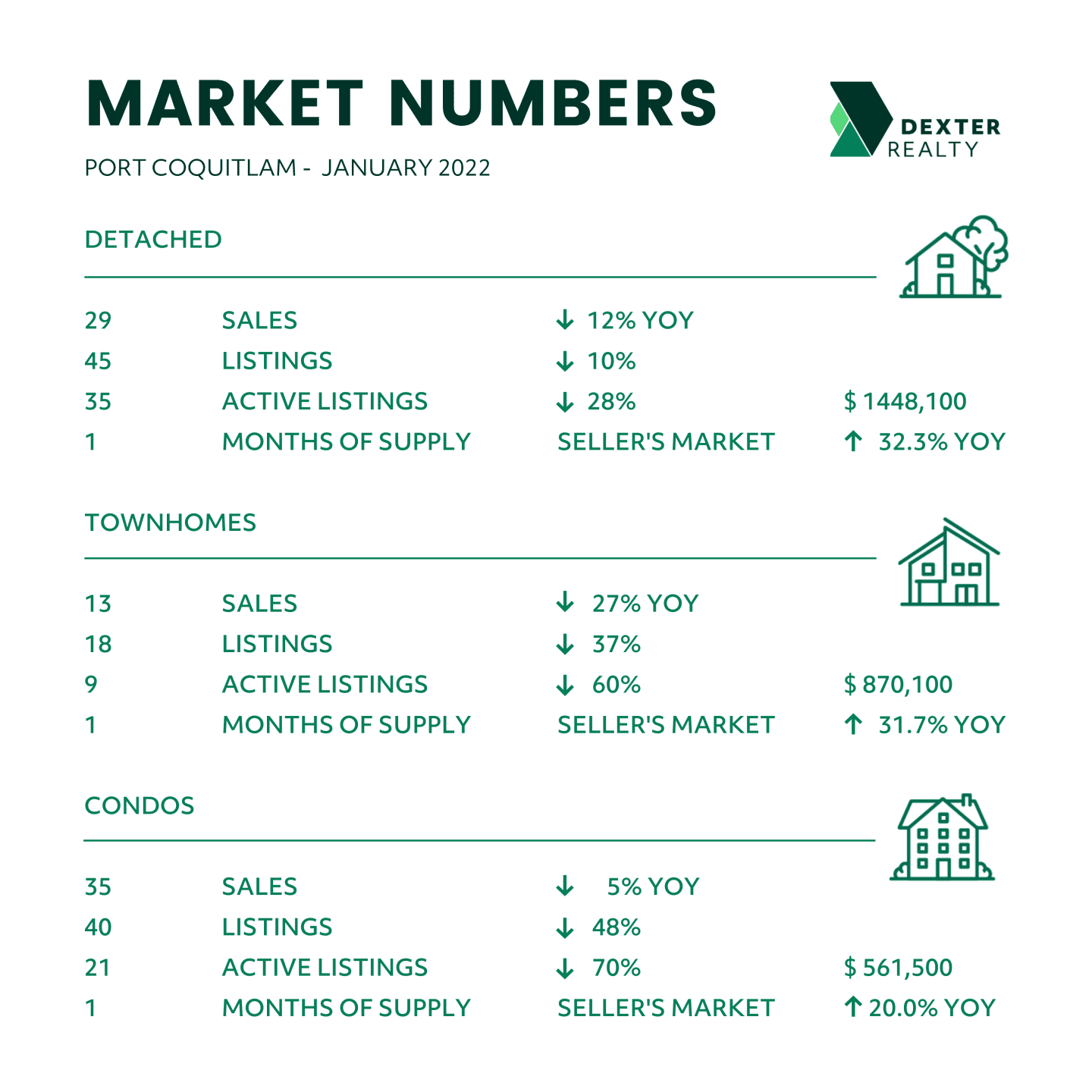 Sales generally declined in January compared to December 2021, dropping 28% to 77 transactions. New listings in January were down 33% compared to January 2021 as the city got off to a slow start in the year of the Tiger. Despite the lull in action, the benchmark home price increased 27%, the biggest year-over-year increase in the Tri-Cities, to $1,022,500. There is only about a one-month supply of listing in Port Coquitlam and the sales-to-listing ratio of 73% is eating it up quickly 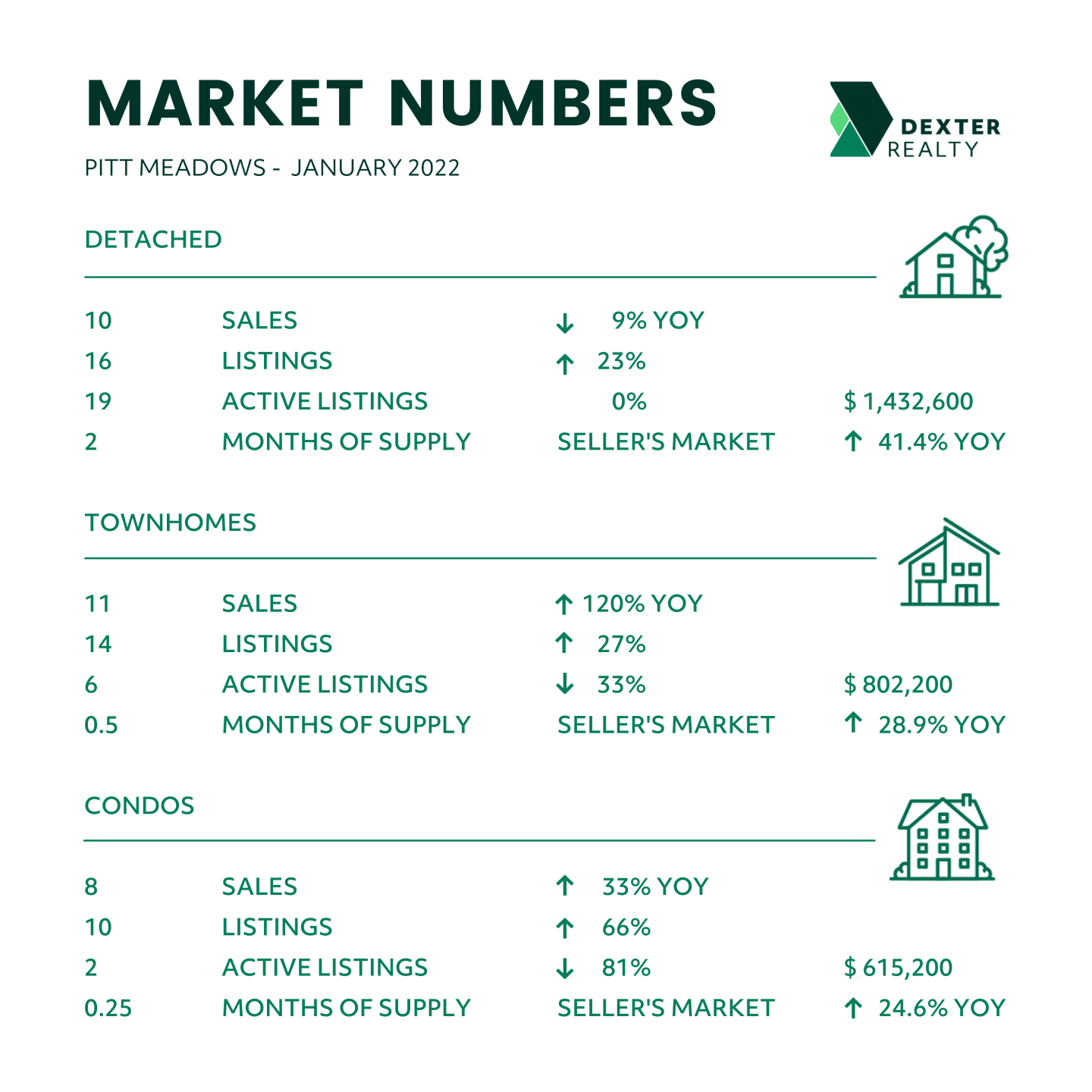 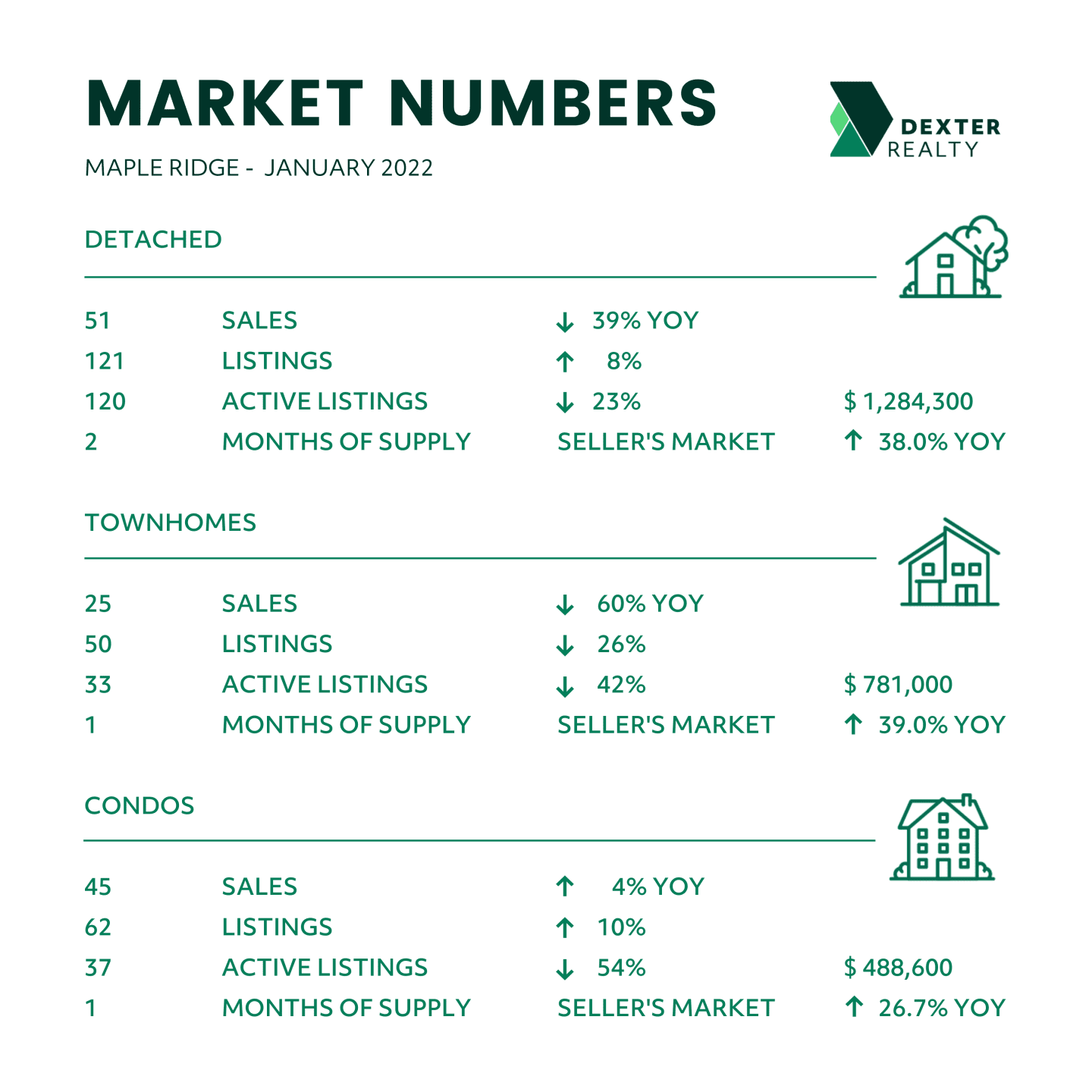 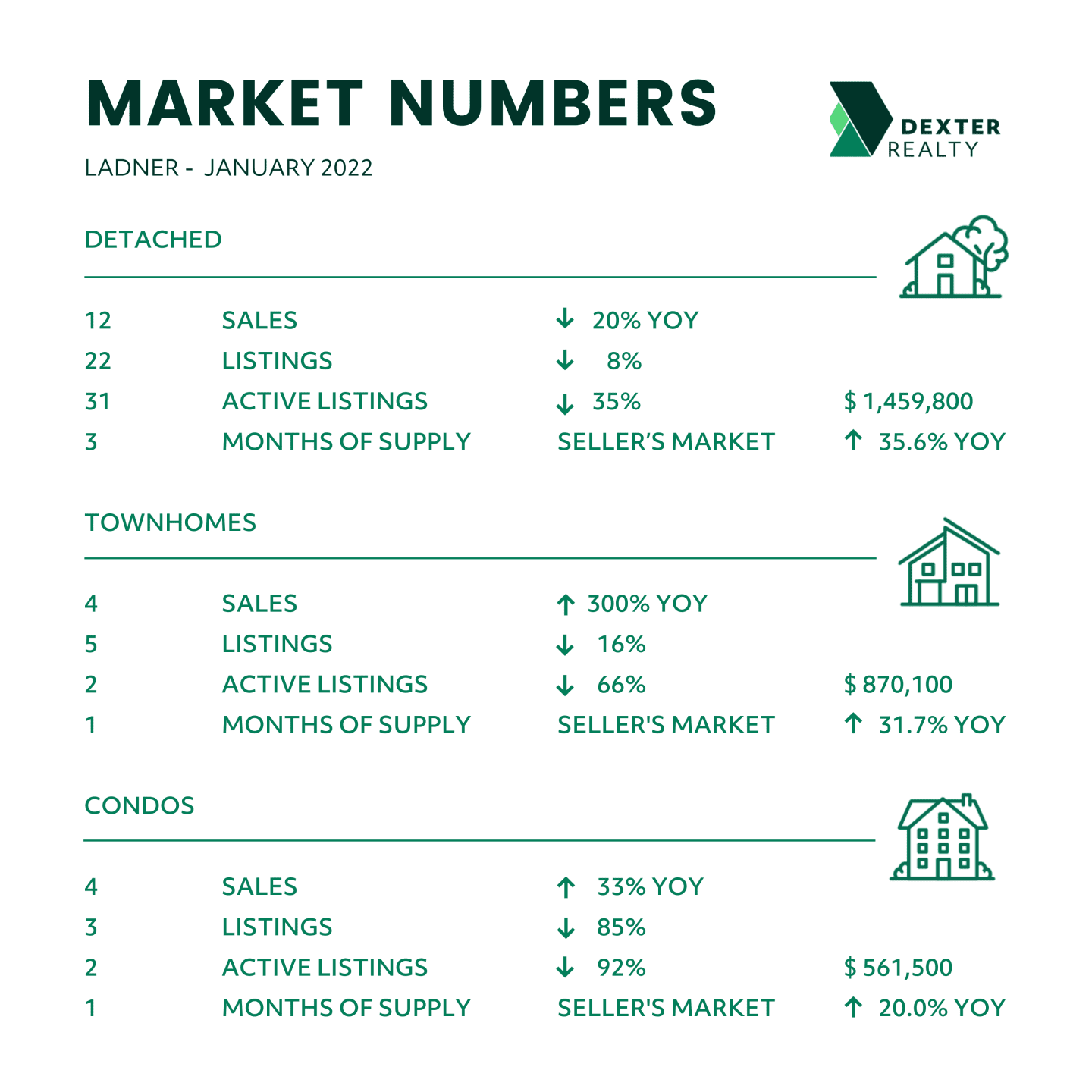 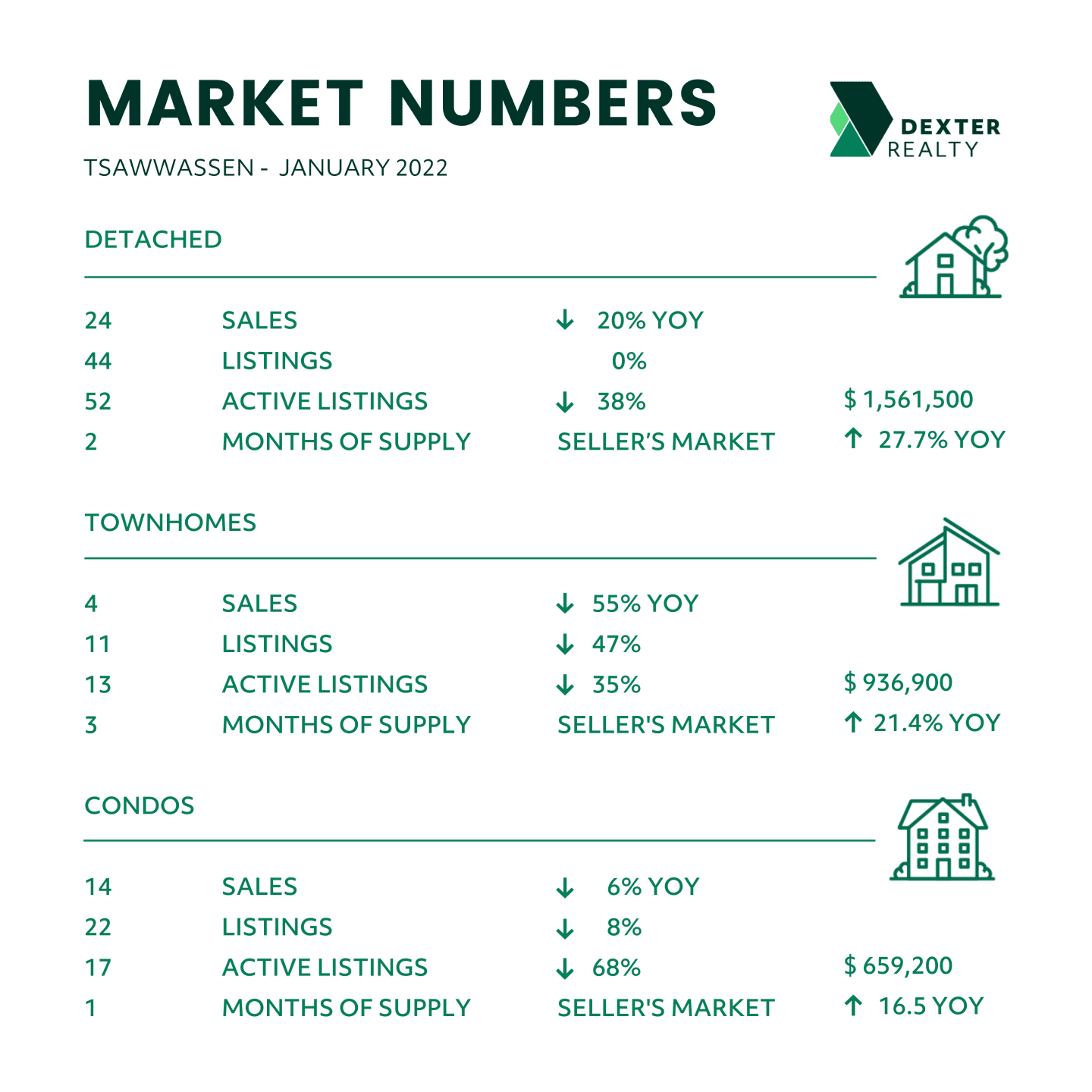 Watch for a major new multi-family housing developments in the Semiahmoo Town Centre of South Surrey, where Surrey council recently approved a plan that sets building height limits of up to 28-storeys. The plan also allows for a corridor of six-story buildings along 152 Street from 18 Avenue to 23 Avenue. Surrey, which has led new home construction over the past year, saw housing sales contract in January. Detached sales were down 33% from a year earlier; townhouse sales slid 35.4%, though condo apartment sales increased 20% to 291 units. The drop in detached house sales may be a reaction to a 43% surge in average prices from a year earlier to a new all-time high of $1,986,959 in January. Townhouse prices rocketed up nearly 44%, rising from $670,044 a year ago to $936,844 in January 2022.