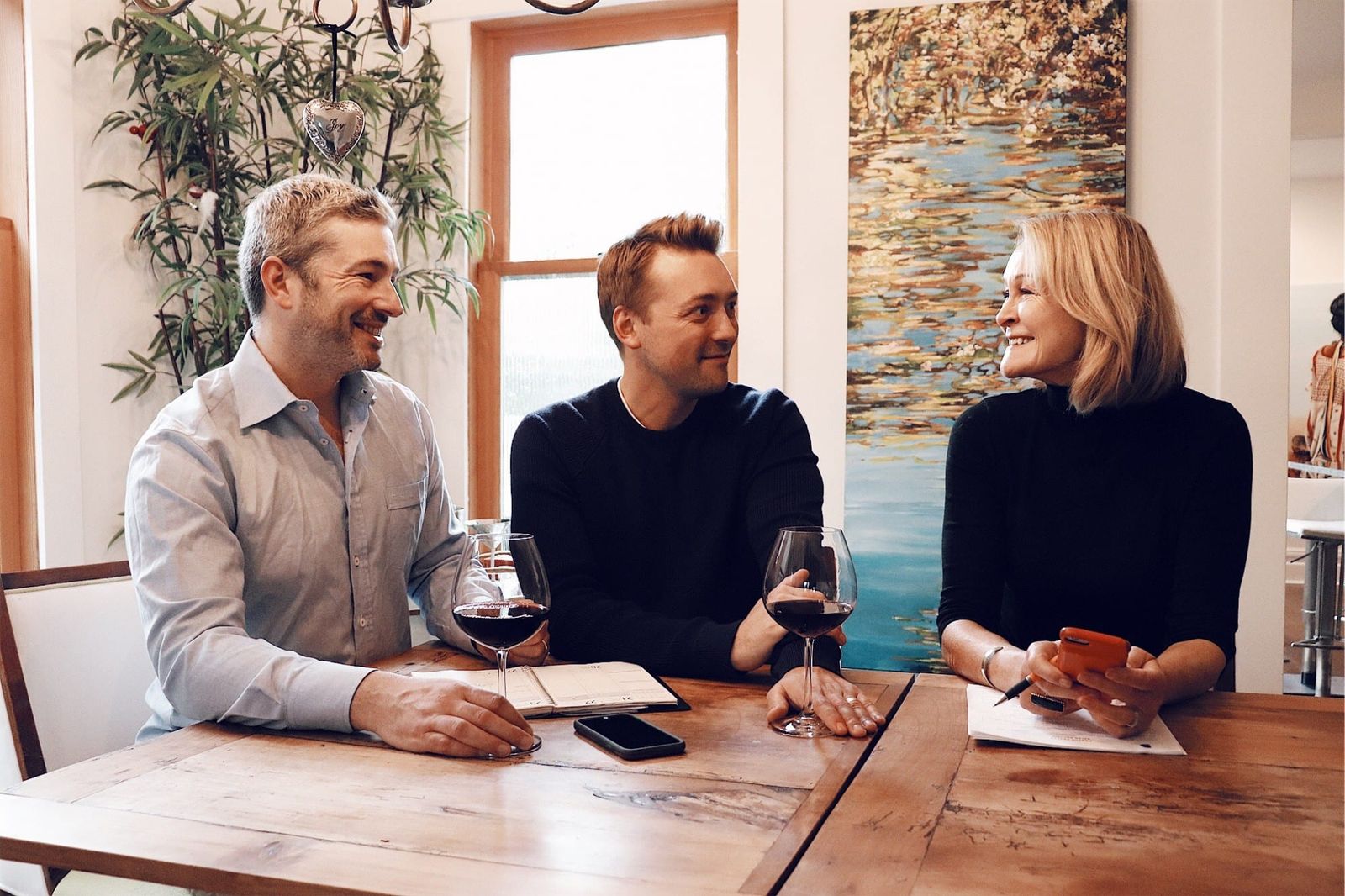 After thirty years as a successful solo agent, Marilou Appleby changed tracks and formed a team with her son, Louis, and his husband, Sean.

Dexter Realty is known for putting their agents first—so it’s no surprise they’ve entrusted us, their in-house Design Team, with the enjoyable mission of featuring their remarkable agents and teams, and sharing a slice of those agents’ Dexter story.

We had the pleasure of catching up with Marilou, Louis and Sean in Strathcona just before the holidays. After being greeted with good cheer and the offer of our beverage of choice, we got to fuss an adorable dog, admire Marilou’s beautiful home and to talk about how three decades of success as a solo real estate agent translated beautifully into a family team. It wasn’t a surprise to hear that Dexter’s way of treating everyone like a family and culture of support helped pave the way.

Before we jumped into the story of her team, we took a minute to chat about Dexter’s culture.

“To me, Dexter really is family and you couldn’t get better support,” Marilou said. “We work as a team. Truly. If you have any issues, you can talk to any of your colleagues.”

“You see this everyday at Dexter. Just the other day I saw a colleague posting a property similar to the one I’d just sold,” she continued, “and I told her about the eight offers we’d had to help her price accordingly. I was happy to help, and she appreciated the insight and used it to advantage. This kind of moment isn’t just good for her—it’s good for real estate in general.”

Standing at her kitchen counter, effortlessly jugging different threads of correspondence on a laptop, a smart phone and a notebook, it’s clear Marilou not only loves her job, but is ideally suited to the role.

We asked her what brought her to Dexter in the first place, and why she’s stayed for her three-decades-long career.

Giving her dog a scratch, she told us, “My father said to me, “if you’re going into real estate, you better go with Christine Dexter.” Christine was the benchmark for realtors at the time, and the company is still run that way.”

“In this business, someone is always trying to poach you, and I’ve never even been tempted.”

“Why would I want to go somewhere else? If it’s 10:30PM and I’m working and I have a question, there are at least 3 Managing Brokers I can call who will pick up the phone without hesitation—and with unshakable good cheer. They’re always happy to help their agents.”

Her son, Louis, and his husband, Sean, offer some good-natured ribbing as we shift from the kitchen to their dining table. It might have been pouring rain outside, but the cracking fire and warm light let us enjoy the view of the garden while we asked Marilou to share a stand out Dexter moment with us.

After taking a moment to ponder, Marilou said, “I was doing an assignment on a pre-sale—it was a nightmare calculating the GST, not clear who is paying what portion—and I needed Kevin’s help. He was out somewhere where he probably shouldn’t have been picking up the phone, and his response was immediate. He gave me the answers I needed, and helped me ensure everything went through without a hitch.”

“And then there’s Jerry Jackman, our in-house mortgage broker. I’ve called him at 11PM at night. He was watching a movie at the theatre and he left to answer the phone and help.”

It’s clear Marilou could easily fill a book with stories about Dexter—all of them full of those small, near indefinable things that transform a workplace into the supportive, welcoming environment that makes a mother want to bring her son and his partner into a newly created family business.

With a grin, Marilou opens a bottle of wine and pours glasses for everyone not driving.

“Now my career has expanded to include my family,” she said, holding up the glass to clink with Louis and Sean. “Louis has been working with me for four years. It seems like he started yesterday but he’s been there for years. He was an actor, and that life is hit-and-miss, and he and his husband Sean wanted to start a family. I said you need to have an income you can rely on, and that you’re responsible for. So he joined me in real estate.”

“Now Sean has joined our team. We all have different strengths and we all get along.”

Louis and Sean grinned at us while Marilou told us some of the unique talents that make them such an effective team:

“Louis has a photographic memory and is very good with the nuts and bolts of things. So I said he’d be such a good compliment to me. I’ve been in the business a while and I’ve seen a lot of changes in the business—but nothing to compare with the past three years. He’s crafty. Brilliant!”

“Sean is amazing. The first showing he did, Louis and I had been at a service for one of our colleagues who had passed away. And we had clients who could only meet us right after the service, so we rallied. But then another listing came up, and Sean took them. It was the first listing they’d seen, the first one he’d shown, and it resulted in a sale. He’s very personable, but also can be all business when he has to be.”

“For them to come into real estate at a more challenging time in the market, when they haven’t known anything else. It’s just the way it is. It works out so well. It’s quite an amazing team. It’s family.”

As we leave this delightful team to their work and remaining wine, it’s clear to use that, at the end of the day, that’s what Dexter is: Family.

You can catch up with Marilou, Sean and Louis at applebyandassociatesrealty.com or on their instagram here